This is the fourth part of our Campervan Renovations series.  To see where it all started, you might want to check out the three previous posts:

Now that we’ve got the “bedroom” walls insulated and covered, the next priority was a new bed. We wanted a bed that wouldn’t need to be set up and dismantled each morning, so it would have to be made smaller to leave room for the dinette. After using the van to haul lumber from Home Depot a couple of times, we also knew that the new bed would have to allow for that occasional purpose as well. We think we’ve created the perfect solution. 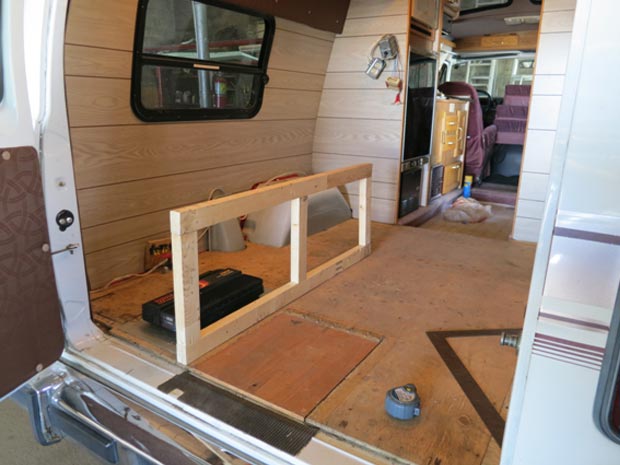 I started out by building a frame on the driver’s side of the van, which was designated as the “foot end”. I used 2×3 lumber which is likely a bit of an overkill, but I wanted to make sure the bed was solid. This side of the frame had to be placed between the inverter on the left and the trap door on the right, so I was somewhat restricted on this portion of the design. 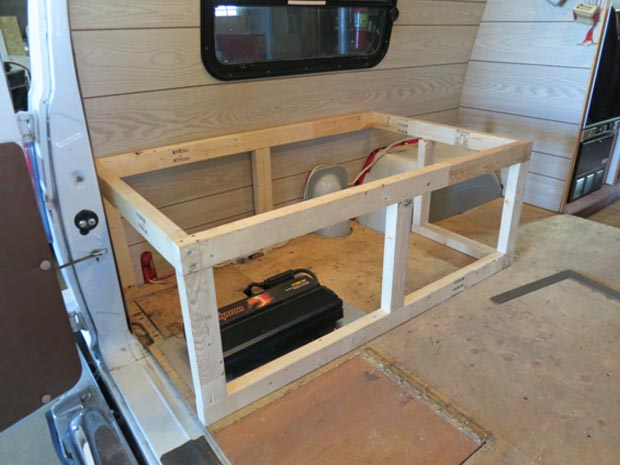 More of the foot end of the frame, this time partially built around the wheel well. 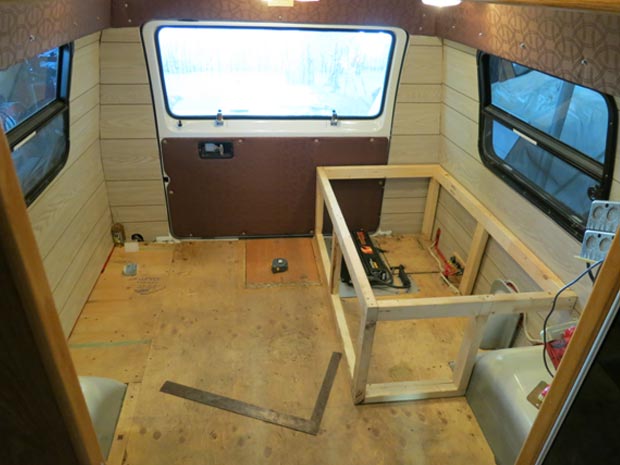 This angle gives a better idea of the space which this end of the bed takes up. The two wheel wells will eventually become permanent seats for the dinette. 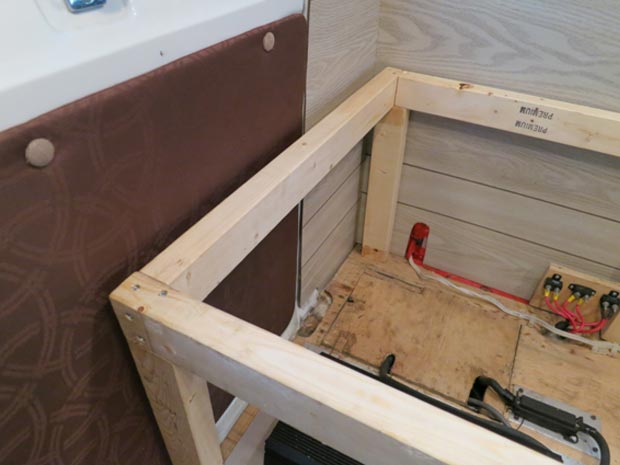 With the rear door closed, there is only about a ¾ inch gap. 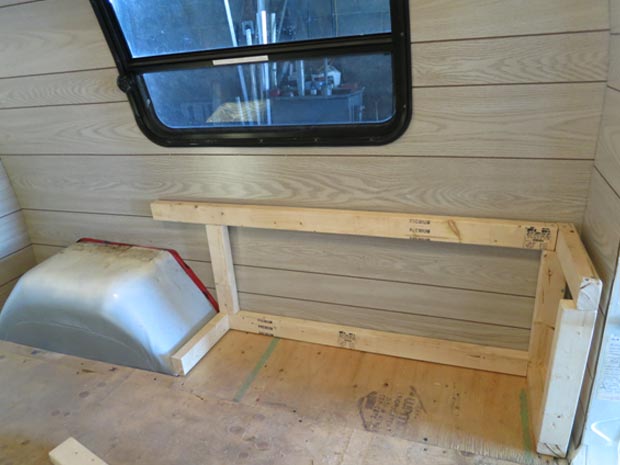 Next I started constructing the passenger’s side (head end) of the frame. Once again, it had to be built around the wheel well. 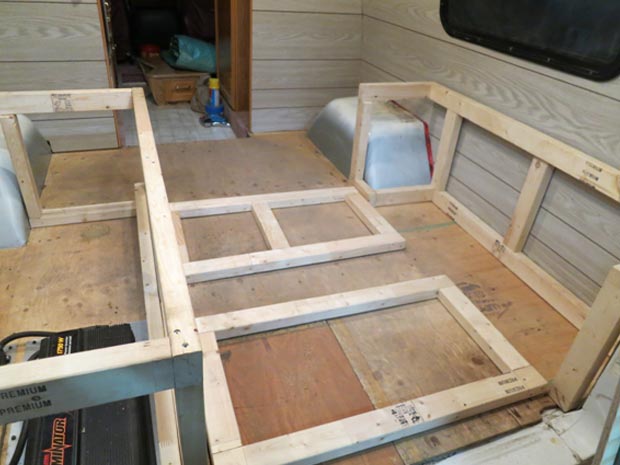 With both ends of the frame complete, I built the two sides. Since we wanted to still have the option of hauling lumber (or drywall, or bicycles, etc.) These sides will be hinged so that they can fold down, as seen here. 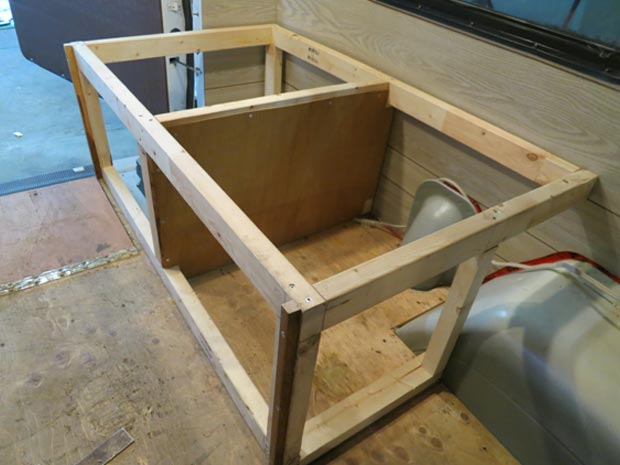 The inverter requires a certain amount of dedicated ventilation space, so I added a piece of 1/8 inch plywood to segregate it from the under-bed storage space. 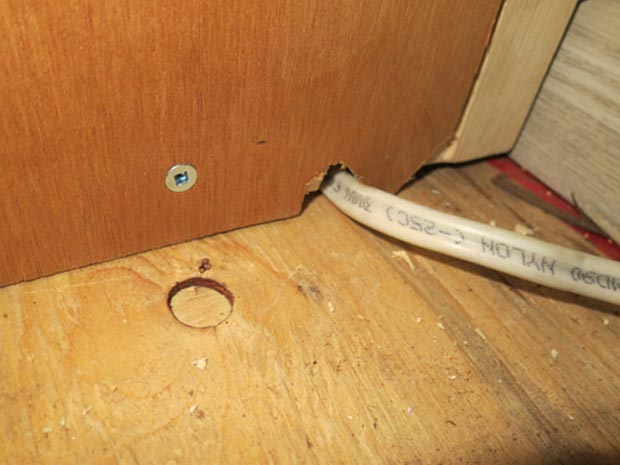 Notches had to be cut to pass the electrical wires through. 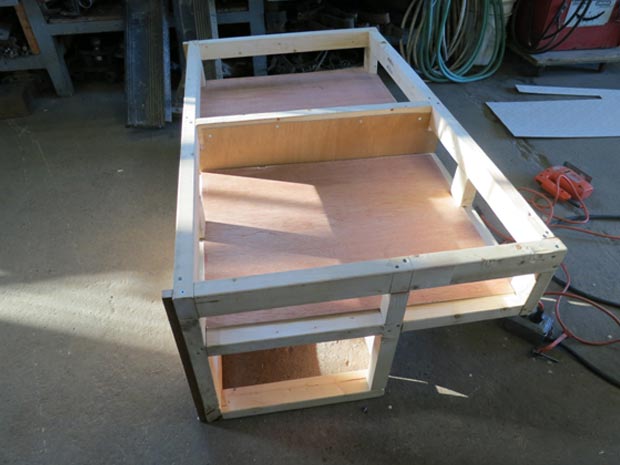 With the foot end removed temporarily (it was easier than continuing in such a confined space), I added two shelves and a frame for a drawer. 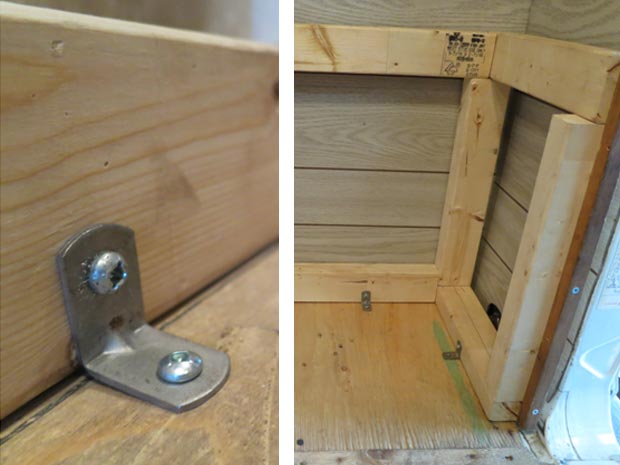 Both ends of the frame were fastened to the floor with “L” brackets. 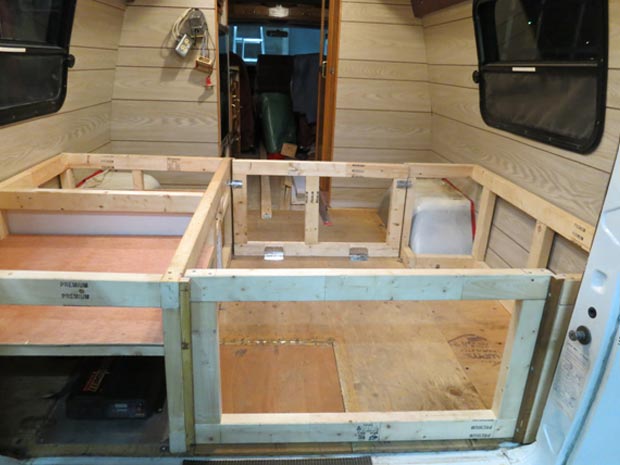 The collapsible sides were then attached with hinges and slide latches to hold them upright. When collapsed, there is easily enough room for 30+ full sheets of drywall or plywood. It finally started looking like a bed once I added the plywood top. 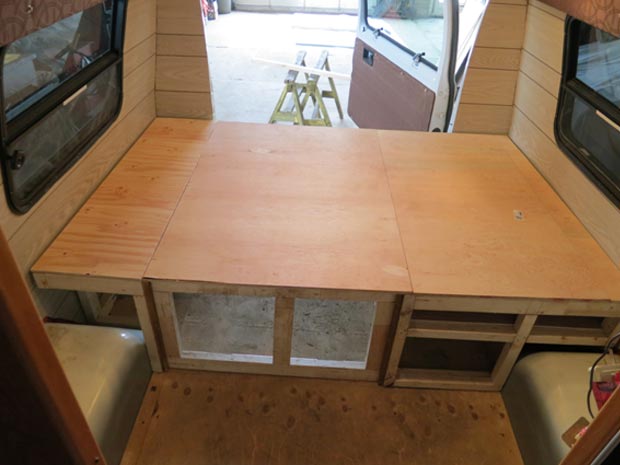 Once I add a hinge, the foot end will lift up to expose the two shelves, and the head end will lift to access storage space that is about 4 feet wide, 4 feet long and 1.5 feet deep. 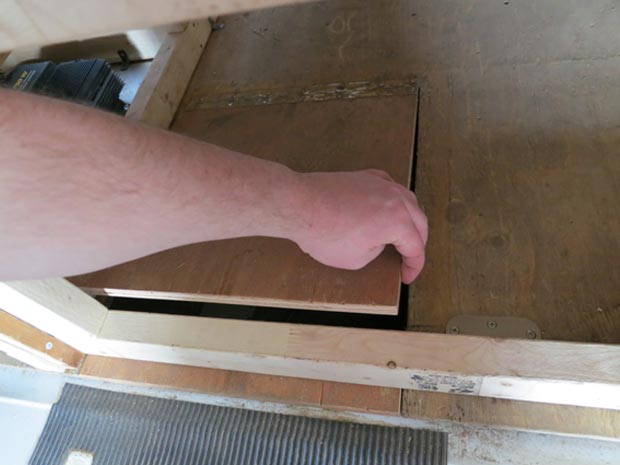 The trap door had to be modified to work with the new bed frame. 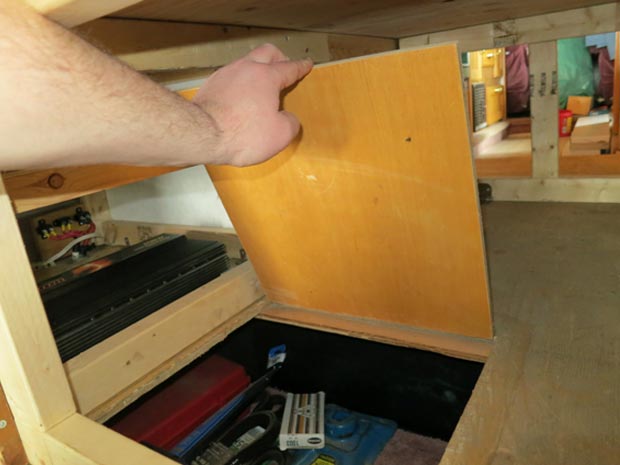 It now opens wide enough to access tools and spare parts, even with the bed in place. 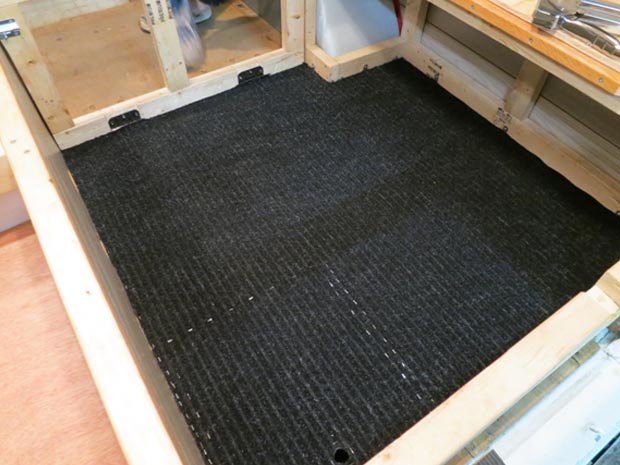 The floor under the bed was then covered with black industrial carpet. This makes it easier to slide items in and out of the back while also making the space look more finished. 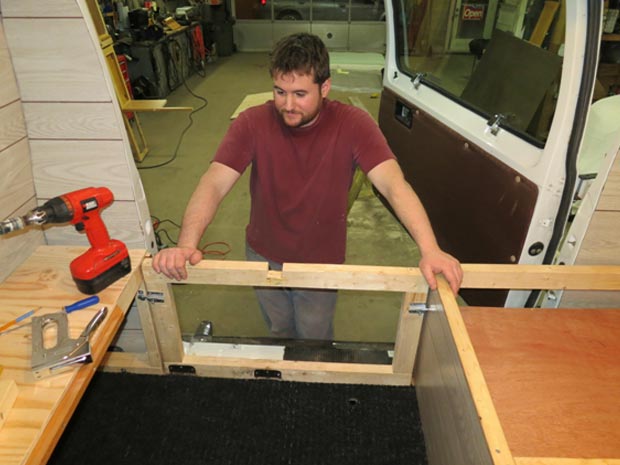 Before taking a break to admire my work, I also cut a small notch in each of the collapsible sides. This will act as a support for the cross member of the bed surface. 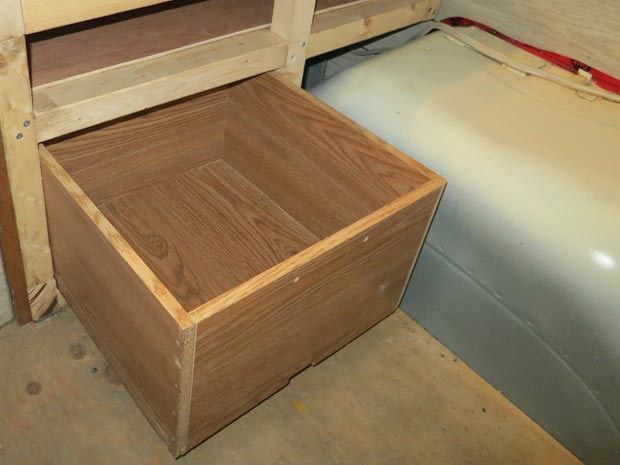 After my break, I re-purposed material from the original bed to build a new drawer. 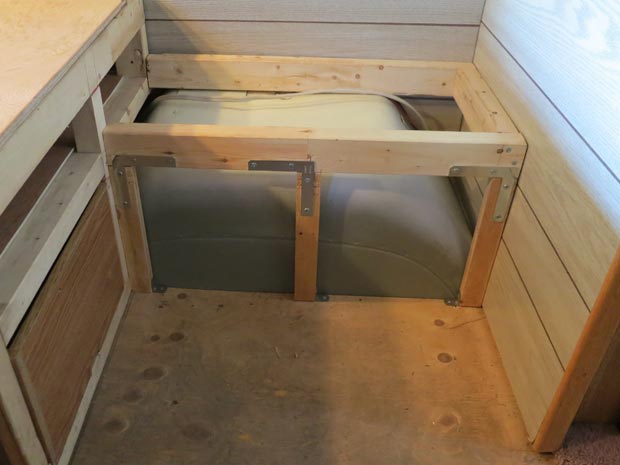 With the bed frame complete, I moved on to the dinette seats.  I started out by building a frame around the wheel wells. 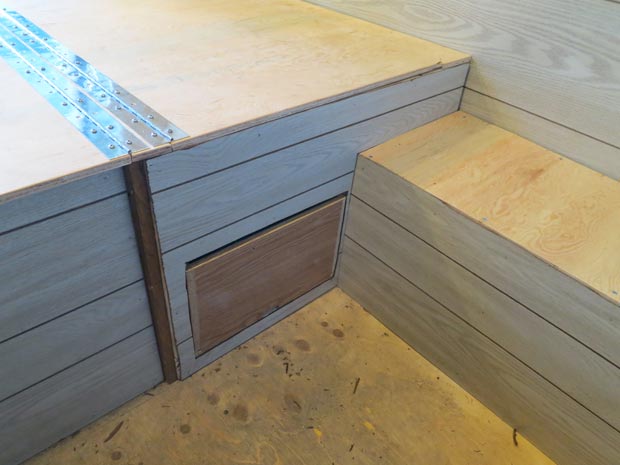 Next, I added a plywood top and finished everything off with more of the wall paneling. 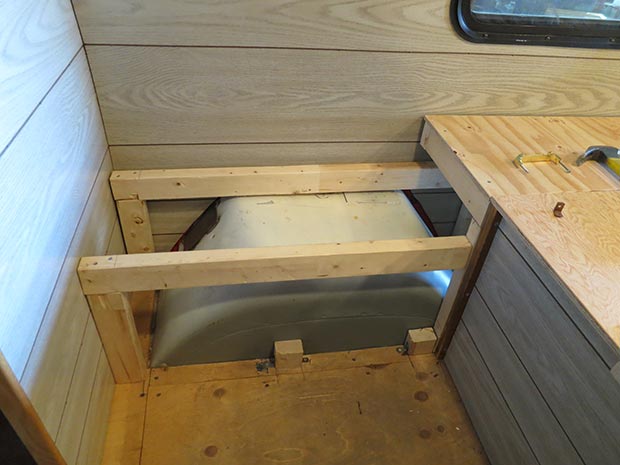 I did the same on the other side. 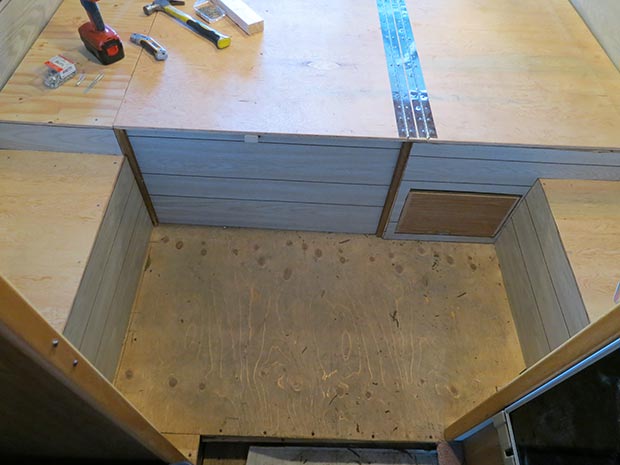 The final product.  All that’s left is a mattress and eventually some seat cushions, which will be covered in the next post.