A couple of months ago, Paula and I decided to buy a used campervan.  We had a number of reasons for this decision: it could be a comfortable place to clean up after a back-country camping trip (before the long drive home), it could be an easy way to crash in a friend’s driveway after a party, and it would certainly serve as luxurious accommodations for the occasional “car camping” trip.  However, one of our biggest reasons for buying the campervan was that we recently got engaged and are planning to take a cross-Canada road trip for our honeymoon!

We looked at a number of options before making our purchase, but eventually decided on a 1992 Pleasure-Way.  We got an incredibly good deal, and it had pretty much everything we could ask for in such a small package.  It’s built on a Dodge Ram chassis, has a bed, a toilet, a sink, a 2-burner propane stove, a 3-way fridge (propane, AC, and 12v battery), a roof air conditioner, a propane furnace, and a pile of storage space.  It basically has everything except a shower.  Plus, Pleasure-Way is a Canadian company, so it seemed fitting.

We were very lucky to be able to take it on a couple of weekend trips before making our final decision, and we loved it! We knew right away that we would want to make some modifications, but overall it was perfect.

The rest of this post will serve as a pre-renovation tour of the campervan, as it was when we first bought it.  Future posts will document the various modifications we make in preparation for our honeymoon, this summer. 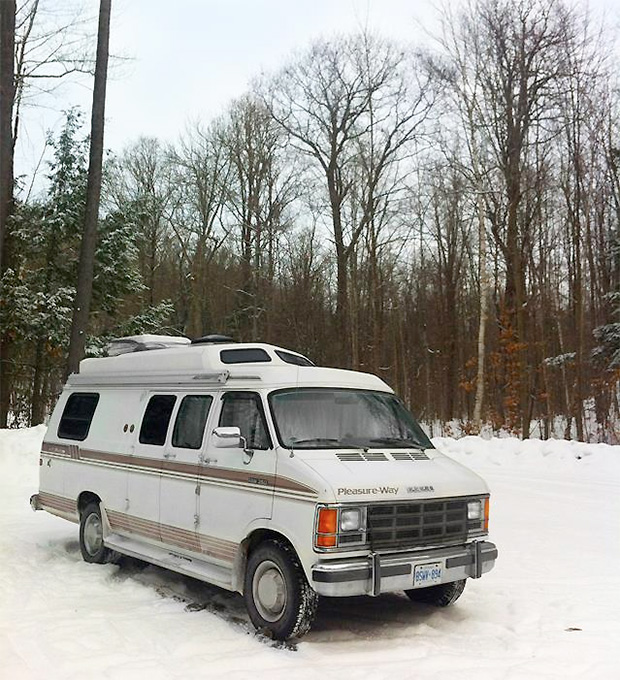 This is a photo of the exterior of the van during our second test trip, on New Year’s Eve.  We spent the night in Frontenac Provincial Park, north of Kingston, Ontario.  This trip not only allowed us to test the furnace and other amenities, but also the van’s ability to power through snow drifts and climb over impressive hills on un-ploughed dirt roads. 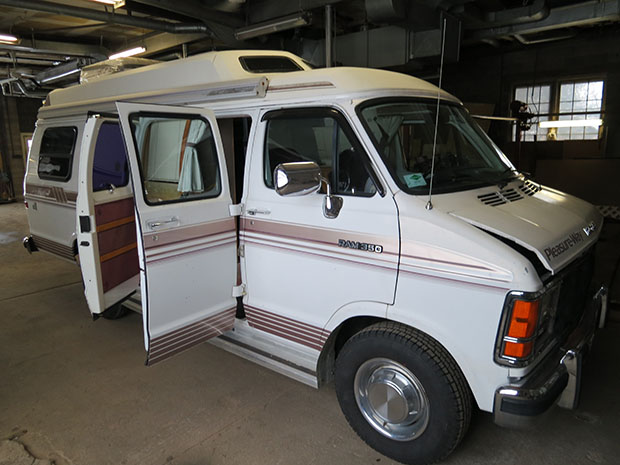 We’re very fortunate that Paula’s father is a mechanic and owns a large shop, so we’ve been able to park the van in a climate-controlled space. 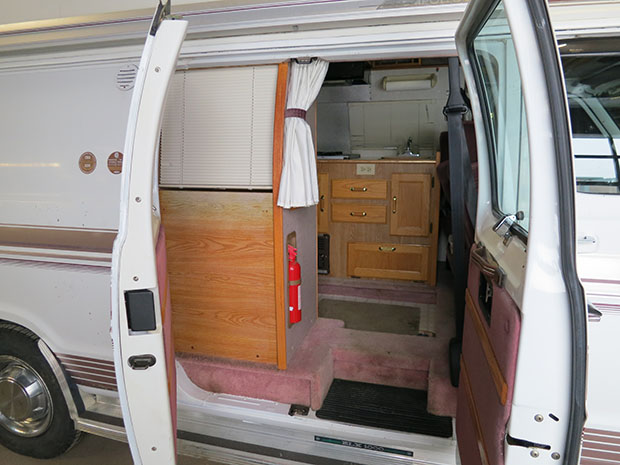 On the passenger side, the double-doors open to enter the living space of the van.  In front, you can see the kitchen and to the left is the washroom. Above the doors is a large retractable awning. 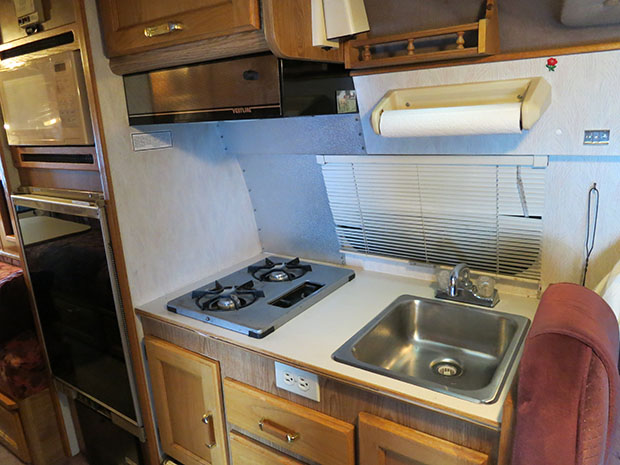 Stepping inside, you can see the kitchen sink and 2-burner propane stove.  Above the stove is a range hood (with fan and light) as well as additional storage.  Above the Sink is a small window which currently has the blinds closed. 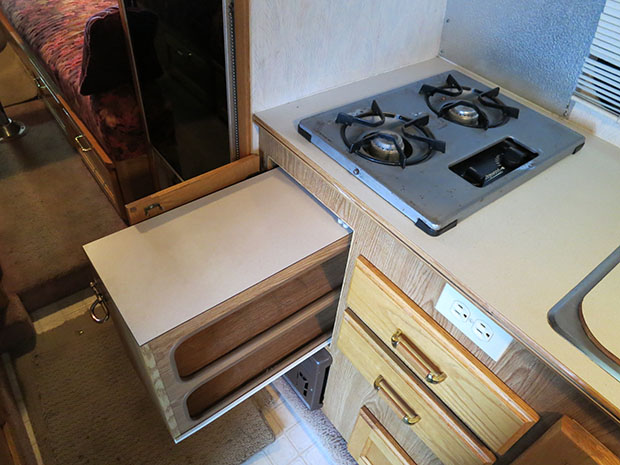 Under the sink and stove is a power outlet and a number of drawers and cupboards.  This one is specifically designed for canned goods and has a built-in counter top extension. 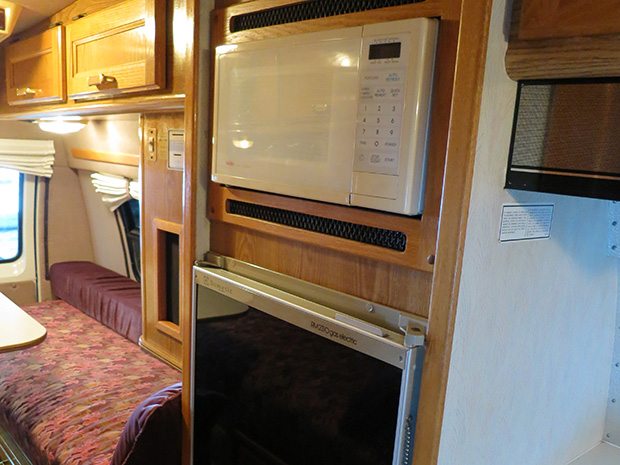 Just past the stove is a microwave and 3-way fridge that runs on “shore power” when plugged in at a campsite, 12 volt battery power when driving, and propane when parked in locations without an electrical hook up. 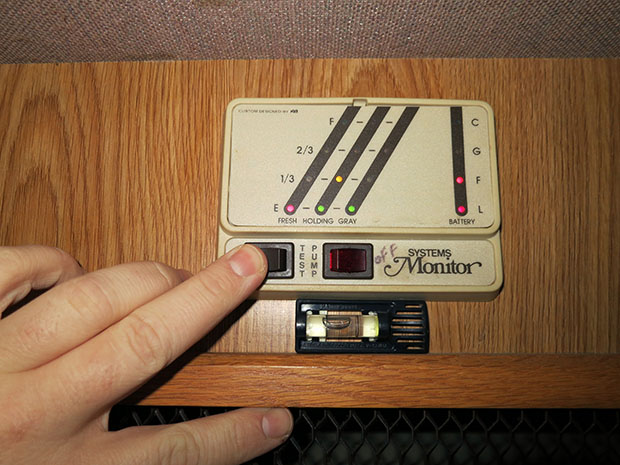 Above the microwave is a level and a meter for the water tanks and living-space battery. 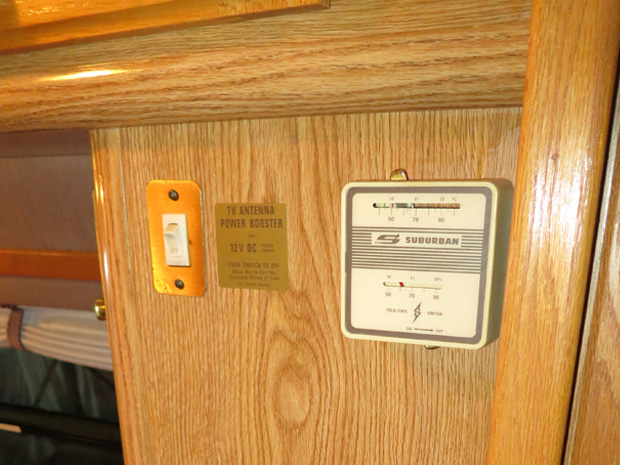 Just to the left of the microwave (inside the dinette / bedroom area) there is a thermostat for the propane furnace as well as a switch to extend the roof antenna for the TV.  Oh, the 90s. 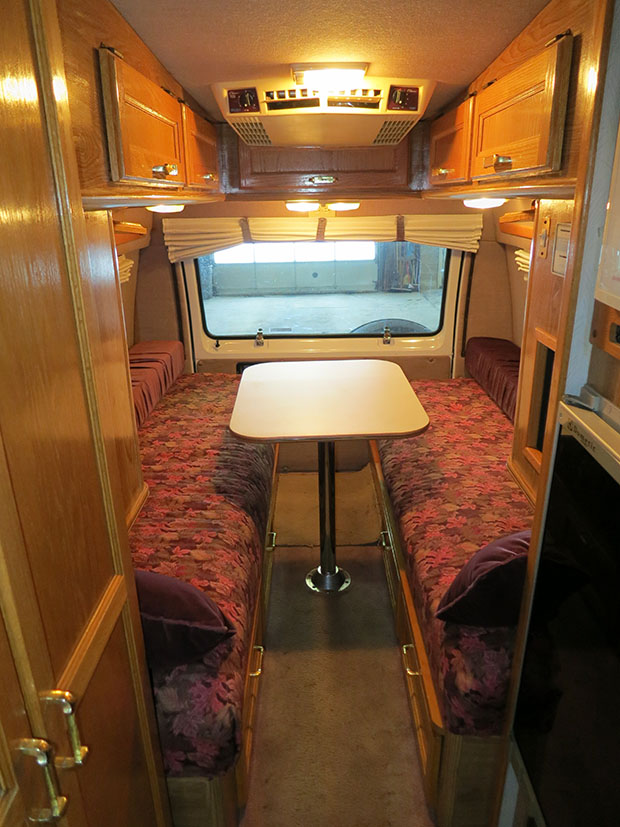 Past the kitchen, you can see the dinette, which transforms into a bed.  On the ceiling, there are a number of storage cupboards and the full-sized roof air conditioner.  As you can see, the overall colour-scheme  is 90s dusty rose (pink) and the benches have been recovered with a horrible leaf pattern – this won’t be sticking around long.

Under the benches of the dinette, there is more storage space and in the second photo you can also see the removable leg of the dinette table. 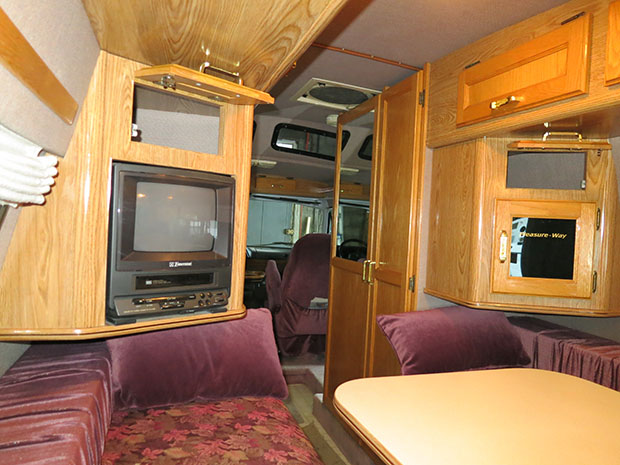 While sitting in the dinette / bedroom, you can see the old-school combo TV / VCR unit and again more storage cupboards.  On the right side of the hallway (heading back toward the entrance) is a closet and the washroom. 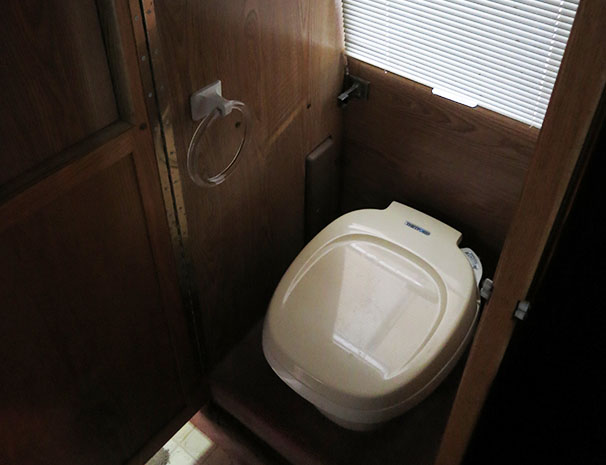 The washroom consists of a small RV toilet and a window.  It’s not much, but for a couple that is used to using trail-side box toilets, it’s a HUGE step up. The door also serves as a privacy wall from the side entrance and driver seats. 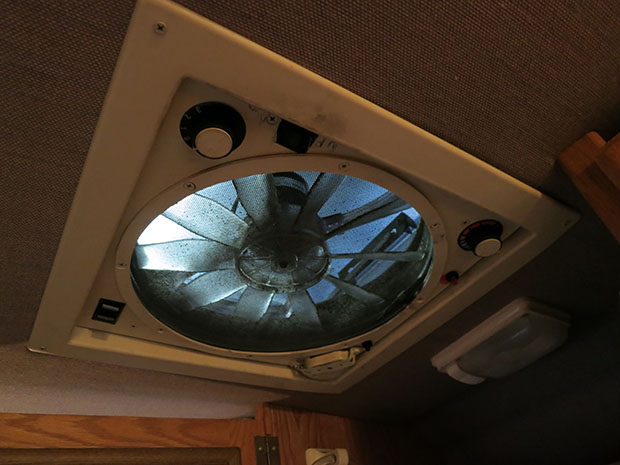 Above the toilet is a “Fantastic Fan”.  It can pull fresh air in, or exhaust air out.  It even has a built-in thermostat, which can turn it on automatically once the interior hits a specific temperature.  This should hopefully help to keep it cool during the night. 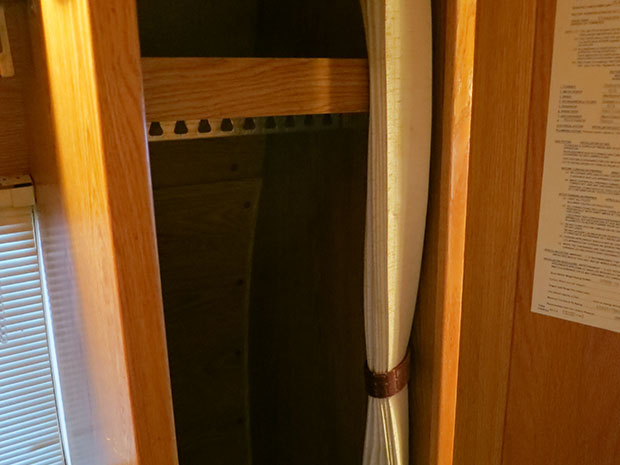 The small clothes closest also contains a privacy curtain to block the bathroom off from the dinette / bedroom. 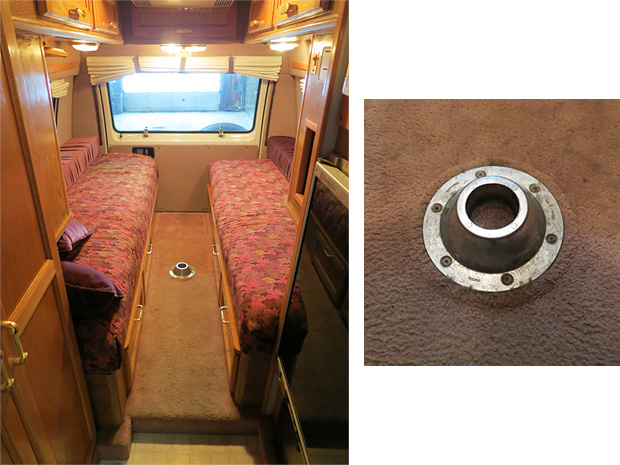 To transform the dinette into a bedroom, you first remove the table. The photo on the right is a closeup of the anchor point for the table leg, between the two benches. 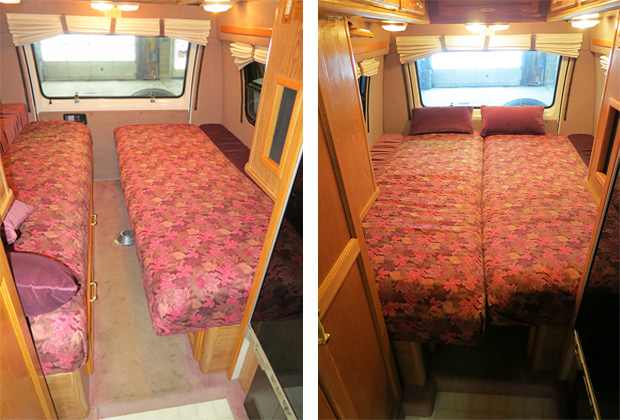 The two benches then push together and the back rests fill in the spaces to form an incredibly roomy queen size bed. 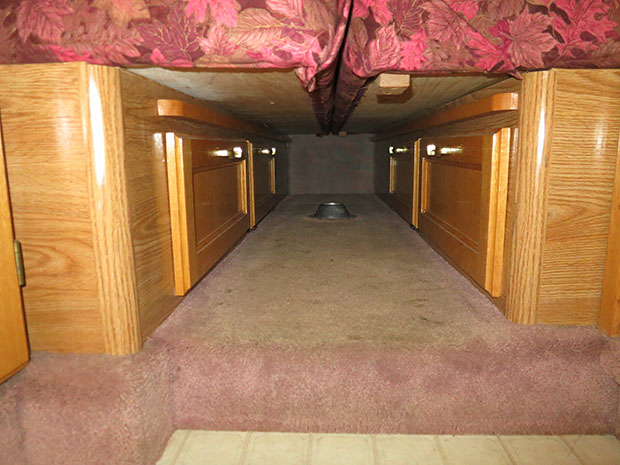 Though cramped, you can still access the under-bench storage cupboards and drawers, even when in “bed mode”.  Plus, the space between them can temporarily store any items not needed during the night. 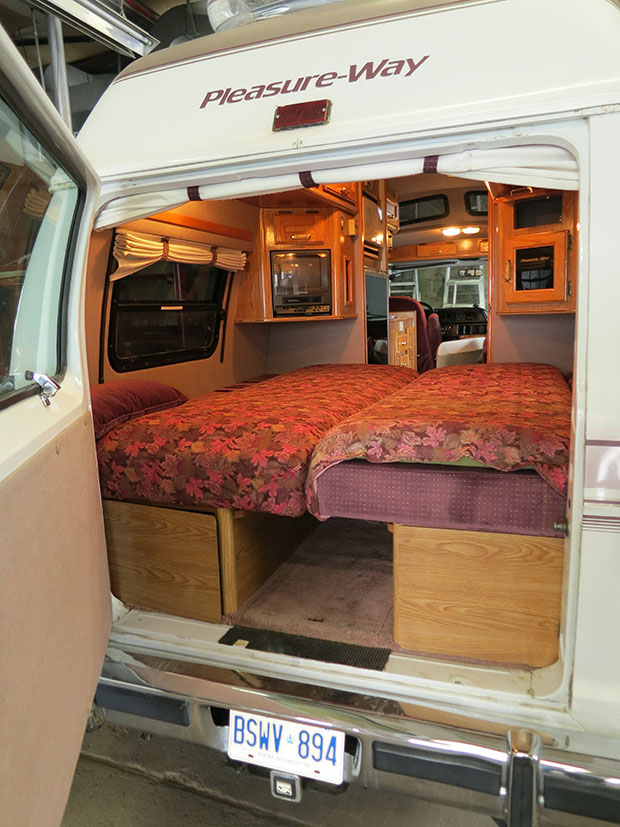 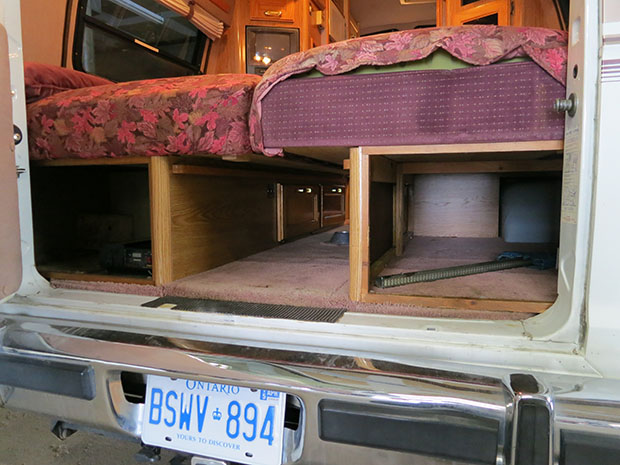 Aside from holding the full-size spare tire, the large back door also gives access to the living space.  Plus, the back panels of the benches can be removed to access the storage space. The rear curtain is actually attached to the inside wall (just visible above the doorway) instead of the door, so it can be lowered if you want to access the storage without having your “bedroom” on display. Under the driver’s side bench, the previous owners have installed a 1750W inverter to convert 12V battery power into regular household 110V.  This lets you plug in regular electrical devices even when just running on battery power. 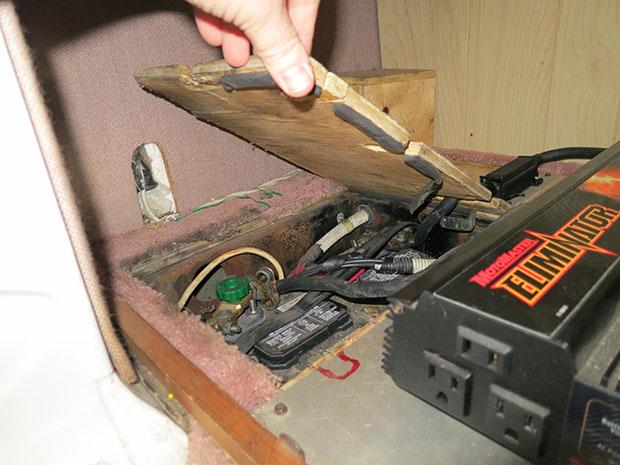 Next to the inverter is the 12v living-space battery that powers the interior (lights, TV, fridge, etc.) when not plugged in to an external power source.  It’s separate from the engine battery, so you never have to worry about leaving the lights on too long and not being able to start the van in the morning.  It charges automatically using the alternator when the van is running.  We’ve used the van on two weekend trips so far, and have not yet been able to drain the battery more than about 50%.

Between the two benches is another trap door, which accesses the under-floor storage for tools, spare parts, road flares, etc. 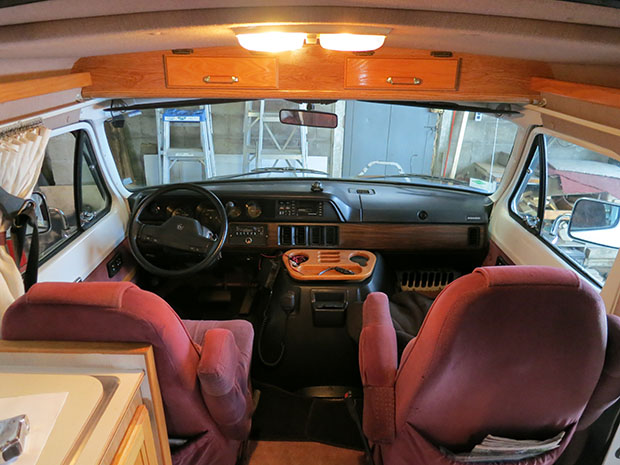 Up front in the cab area, there are two large captain’s chairs, a surprisingly ineffective cup holder / small items organizer, and more over-head storage.  There is also a wrap-around curtain, which blocks off the windshield and side windows for privacy.  And last but not least, the seats swivel around to face the back and there is another anchor point for a small table between them (just out of frame in this photo).  It’s not enough room to have a meal, but not a bad place to lounge for a bit, or if we have guests.

Overall, we really love the van.  It has pretty much everything we could want for our particular lifestyle.  However, there are a number of things that we will be customizing:

We will be posting some progress updates shortly, so be sure to check back soon.

[EDIT: “Part 2: Gutting The Interior” has now been posted as well]